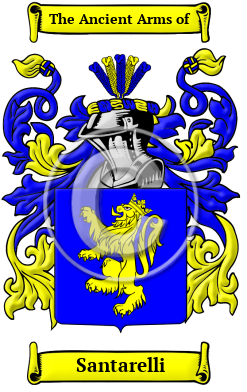 The surname Santarelli was originally a nickname bestowed upon someone who was born on All Saint's Day, the 1st of November, and is derived from the Latin "sanctorum."

Early Origins of the Santarelli family

The surname Santarelli was first found in Lucania, formerly Basilicata, is a territorial division of southern Italy which extended from Tyrrhenian sea, to the Gulf of Tarentum. It was named for Lucani who conquered it in the 5th century B.C. This large territory contained many towns and villages. In those ancient times only persons of rank, the podesta, clergy, city officials, army officers, artists, landowners were entered into the records. To be recorded at this time, at the beginning of recorded history, was of itself a great distinction and indicative of noble ancestry. The family held a family seat in Matero in Basilicata, otherwise known as Lucania. They were a distinguished noble family whose first records begin in 1198 when Eustachio Santoro was Baron of Cancellara.

Early History of the Santarelli family

Spelling variations of this family name include: Santoro, Santori, Santora, Santorelli, Santoriello, Santorini and many more.

By the end of the 15th century, southern Italy was known as the Kingdom of Naples, ruled by the house of Aragon. By the early eighteenth century, the Austrians had gained much of the region, under the rule of the Austrian emperor Kales VI. However, in 1734, Spaniard Don Carlos defeated the Austrians, and the region came under Spanish rule once more. In 1799, the French invaded Naples and...
Another 69 words (5 lines of text) are included under the topic Early Santarelli Notables in all our PDF Extended History products and printed products wherever possible.

Santarelli migration to the United States +

Santarelli Settlers in United States in the 20th Century