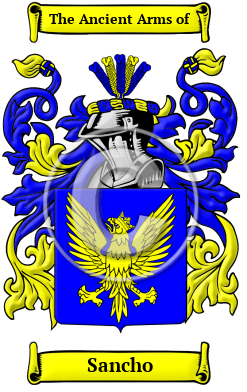 Early Origins of the Sancho family

The surname Sancho was first found in Castile, where the name originated in Visigothic times.

Early History of the Sancho family

This web page shows only a small excerpt of our Sancho research. Another 120 words (9 lines of text) covering the years 1019, 1370, 1550, and 1610 are included under the topic Early Sancho History in all our PDF Extended History products and printed products wherever possible.

Prominent among members of the family were Galin Sanchiz, an Aragonese nobleman of the late twelfth century; Antonio Sánchez Muñoz, thirteenth century Bishop of Albarracín; Fernán Sánchez de Valladolid, Counsellor to King Alfonso XI; Fernán Sánchez de Tovar, Admiral of the Castilian fleet in the 1370s; Juan Sánchez Manuel, Count of Carrion in the reign of King Henry III; Ferrán Sánchez Calavera, fifteenth century poet...
Another 65 words (5 lines of text) are included under the topic Early Sancho Notables in all our PDF Extended History products and printed products wherever possible.

Sancho migration to the United States +

Sancho Settlers in United States in the 19th Century

Sancho Settlers in United States in the 20th Century