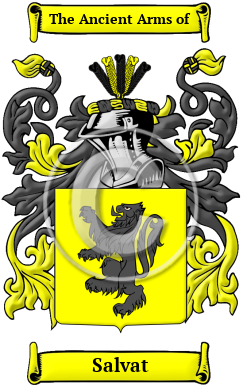 The Salvat surname is derived from the Old French given name Sauvé, which comes from the word "sauver," meaning "to save." The name was given to those who were thought to have achieved religious salvation.

Early Origins of the Salvat family

The surname Salvat was first found in Burgundy (French: Bourgogne), an administrative and historical region of east-central France where the family has held a family seat since early times.

One of the first members recorded of the family was Pierre Sayve, Lord of Flavignerot and an accounts clerk in 1491, and who was elected eleven times as Viscount-Mayor of Dijon from 1514 to 1537. Among his children were: Girard, Receiver General of Finance in Bourgogne in 1543, who counted among his descendants two presidents and a First President of Accounts; Jean, an Attorney General, then President of Parliament in 1551, and the head of the Lords of Bussy, the Counts of Lamothe-Palliers and Thil, among whom were Pierre, Brigadier of the King's Armies, who was killed during the crossing of the Rhine; Henri, a Cavalry Camp Master, who became a Lieutenant-General in Bourgogne; and René-Bernard and François-Bernard, who were Knights of Honour at the Parliament of Dijon in 1685 and 1692; and Etienne, a Counsellor of Parliament in 1527, who also formed the branch of the Lords of Vesvrotte, Echigey, Couchey and Chamblanc; and Pierre, who was a Dean of the Sainte-Chapelle of Dijon, an Abbot of Saint-Marguerite, and an Elect of the clergy in 1554 and 1570.

Pierre Sauve, son of François and Marie (née Malleret) of Libourne, travelled to Canada in the 17th century. After arriving in Quebec he married Marie Michel, daughter of Jean and Marie (née Marcheseau), in Lachine on 27th February 1696. [1]

Early History of the Salvat family

This web page shows only a small excerpt of our Salvat research. Another 31 words (2 lines of text) covering the years 1653, 1716 and 1696 are included under the topic Early Salvat History in all our PDF Extended History products and printed products wherever possible.

Spelling variations of this family name include: Sauvé, Sauvat and others.

Notable amongst the family at this time was Joseph Sauveur (1653-1716), a French mathematician and physicist, Professor of Mathematics and in 1696 became a member of the French...
Another 28 words (2 lines of text) are included under the topic Early Salvat Notables in all our PDF Extended History products and printed products wherever possible.

Salvat migration to the United States +

Salvat Settlers in United States in the 19th Century