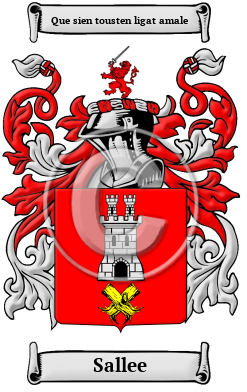 Early Origins of the Sallee family

The surname Sallee was first found in Auvergne, a historic province in south-central France where this distinguished family held a family seat at Montservier, Pélussieu, and Puygermand, and were also members of the aristocracy of that region.

The main line of the family at Pélussieu were elevated to the nobility as the Comtes de Pélussieu and the Marquis de Rochemaure. Another line seated at Auvergne emerged as the Marquis de la Sallé. Junior lines of this family settled in Brittany, Poitou, Bourgogne, Provence, and Languedoc.

Jean LaSalle, born in 1672, son of Jean and Marie, was a French soldier for M. De Lormier, that travelled from France to the New World in the 17th century. After arriving in Canada he married Louise Jousset, daughter of Mathurin and Catherine, at Montreal, Quebec on 9th December 1698. [1]

Early History of the Sallee family

Notable amongst the family was Gadifer de La Salle (1340-1415), French knight and crusader of Poitevine origin who, with Jean de Béthencourt, conquered and explored the Canary Islands for the Kingdom of Castile; Saint Jean-Baptiste de La Salle or John Baptist de La Salle (1651-1719), French priest, educational reformer, and founder of the Institute of the Brothers...
Another 57 words (4 lines of text) are included under the topic Early Sallee Notables in all our PDF Extended History products and printed products wherever possible.

In the United States, the name Sallee is the 4,084th most popular surname with an estimated 7,461 people with that name. [2]

Migration of the Sallee family