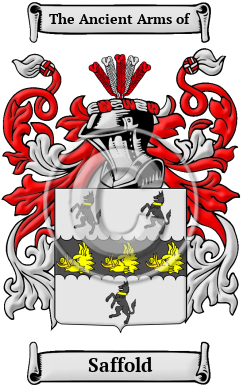 In ancient Anglo-Saxon England, the ancestors of the Saffold surname lived at the estate of Salford which had three early locations in England including Lancashire, Oxford and Bedfordshire.

Early Origins of the Saffold family

The surname Saffold was first found in Bedfordshire in the parish of Salford. "This place, which lies on the borders of Buckinghamshire, was formerly the property of a family who took their name from it, and was afterwards possessed by the Drakelows, and the Charnocks, from whom it passed by marriage to the Herveys." [1]

Early History of the Saffold family

This web page shows only a small excerpt of our Saffold research. Another 88 words (6 lines of text) covering the years 1260, 1691 and 1674 are included under the topic Early Saffold History in all our PDF Extended History products and printed products wherever possible.

It is only in the last few hundred years that the English language has been standardized. For that reason, early Anglo-Saxon surnames like Saffold are characterized by many spelling variations. As the English language changed and incorporated elements of other European languages, even literate people changed the spelling of their names. The variations of the name Saffold include: Salford, Sallford, Sallforde, Salforde and others.

Distinguished members of the family include Thomas Saffoled (died 1691), English empiric, (a person who, in medicine or other branches of science, relies solely on observation and experiment) originally a weaver by trade, received a license to practise as a doctor of physic from the bishop of London on 4 Sept. 1674. "He had a shop at...
Another 57 words (4 lines of text) are included under the topic Early Saffold Notables in all our PDF Extended History products and printed products wherever possible.

In the United States, the name Saffold is the 14,489th most popular surname with an estimated 2,487 people with that name. [2]

Migration of the Saffold family

Many English families tired of political and religious strife left Britain for the new colonies in North America. Although the trip itself offered no relief - conditions on the ships were extremely cramped, and many travelers arrived diseased, starving, and destitute - these immigrants believed the opportunities that awaited them were worth the risks. Once in the colonies, many of the families did indeed prosper and, in turn, made significant contributions to the culture and economies of the growing colonies. An inquiry into the early roots of North American families has revealed a number of immigrants bearing the name Saffold or a variant listed above: John, Robert and Mary Salford who settled in Virginia in 1611; nine years before the "Mayflower"; John and Sarah Salford settled in Virginia in 1623..