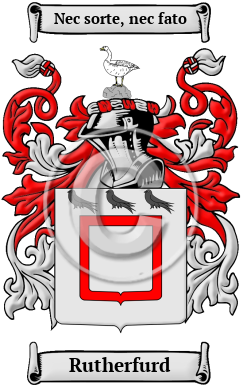 The name Rutherfurd comes from the proud Boernician clans of the Scottish-English border region. The Rutherfurd family lived in the Parish of Maxton, where Rutherford was a town, near Roxburghshire. The place name Rutherford is derived from the Old English words "hryder" meaning "cattle" and "ford," which is "a shallow part of a river."

Early Origins of the Rutherfurd family

The surname Rutherfurd was first found in the Parish of Maxton, town of Rutherford, county Roxburghshire. The first bearers of Rutherfurd on record were two knights: Gregory and Nicholas de Rutherford.

Early History of the Rutherfurd family

Spelling variations of this family name include: Rutherford, Rutterford, Rudderford, Rudford and others.

Notable amongst the family name during their early history was Samuel Rutherford (1600-1661), Scottish principal of St. Mary's College, St. Andrews, born about 1600 in the parish of Nisbet, now part of Crailing, Roxburghshire. [1] Andrew Rutherford (d. 1664), was a Scottish soldier of fortune, created 1st and only Earl of Teviot by Charles II; and Samuel Rutherford (ca. 1600-1661), a Scottish theologian and controversialist, born at Nisbet, Roxburghshire, educated at Edinburgh University, where he...
Another 73 words (5 lines of text) are included under the topic Early Rutherfurd Notables in all our PDF Extended History products and printed products wherever possible.

Migration of the Rutherfurd family to Ireland

Some of the Rutherfurd family moved to Ireland, but this topic is not covered in this excerpt.
Another 60 words (4 lines of text) about their life in Ireland is included in all our PDF Extended History products and printed products wherever possible.

Migration of the Rutherfurd family