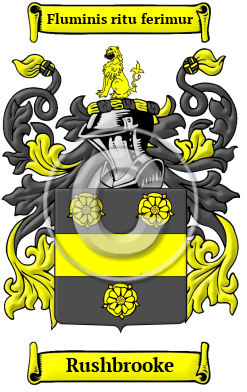 Early Origins of the Rushbrooke family

The surname Rushbrooke was first found in Suffolk where they held the village and lands of Rushbrooke, originally held by Arnulf from the Abbot of St. Edmunds, who was recorded in the Domesday Book census of 1086. The Abbot also held the other Rushbrooke near Bury St. Edmunds. "Rushbrooke Hall, anciently the seat of the Jermyns, afterwards of the Davers family, and now of Robert Rushbrooke, Esq., is a handsome mansion, built in the reign of Elizabeth, and situated in an extensive park." [1]

Early History of the Rushbrooke family

This web page shows only a small excerpt of our Rushbrooke research. Another 64 words (5 lines of text) covering the years 1148 and 1362 are included under the topic Early Rushbrooke History in all our PDF Extended History products and printed products wherever possible.

Spelling variations of this family name include: Rushbrook, Rushbrooke, Rushbrick, Rushbroke and others.

More information is included under the topic Early Rushbrooke Notables in all our PDF Extended History products and printed products wherever possible.

Migration of the Rushbrooke family

Motto: Fluminis ritu ferimur
Motto Translation: We rush on like a brook.