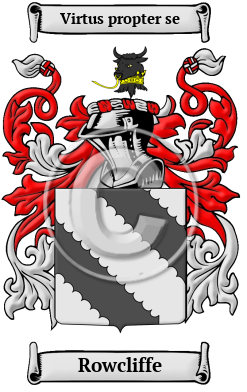 Rowcliffe is one of the many names that the Normans brought with them when they conquered England in 1066. The Rowcliffe family lived in Lancashire, at Radcliffe. The name of this place translates as red cliff, from its Saxon origin and indicates that originally the town was distinguished by its proximity to such a landmark on the east side of Irwell.

Early Origins of the Rowcliffe family

The surname Rowcliffe was first found in Lancashire, at Radcliffe, a parish, in the union of Bury, hundred of Salford that dates back to at least the Domesday Book of 1086 where it was listed as Radecliue. [1] "In the 14th of Edward III., Richard Radcliffe held the manor for the manor of Whalley [at Wiswell]." [2]

Early History of the Rowcliffe family

Anglo-Norman names tend to be marked by an enormous number of spelling variations. This is largely due to the fact that Old and Middle English lacked any spelling rules when Norman French was introduced in the 11th century. The languages of the English courts at that time were French and Latin. These various languages mixed quite freely in the evolving social milieu. The final element of this mix is that medieval scribes spelled words according to their sounds rather than any definite rules, so a name was often spelled in as many different ways as the number of documents it appeared in. The name was spelled Radcliffe, Radcliff, Radclyffe, Ratliffe, Ratliff, Ratlife and many more.

Outstanding amongst the family at this time was William Radcliffe, Sheriff of county Lancaster in 1194; Sir Richard Ratcliffe, KG (died 1485), a close confidant of Richard III of England; Sir Alexander Radcliff (1608-1654), English politician, Member of Parliament for Lancashire (1628-1629); and John Ratcliffe (d. 1609) captain of the Discovery, one of three ships that sailed from England on December 19, 1606, to Virginia, to found a colony. He became the second president of the Jamestown colony, and was killed by the Powhatan Indians. Sir Brian Roucliffe (died 1494) was an English judge, was eldest of the four sons of...
Another 178 words (13 lines of text) are included under the topic Early Rowcliffe Notables in all our PDF Extended History products and printed products wherever possible.

Migration of the Rowcliffe family to Ireland

Some of the Rowcliffe family moved to Ireland, but this topic is not covered in this excerpt. More information about their life in Ireland is included in all our PDF Extended History products and printed products wherever possible.

Rowcliffe migration to the United States +

Because of the political and religious discontent in England, families began to migrate abroad in enormous numbers. Faced with persecution and starvation at home, the open frontiers and generally less oppressive social environment of the New World seemed tantalizing indeed to many English people. The trip was difficult, and not all made it unscathed, but many of those who did get to Canada and the United States made important contributions to the young nations in which they settled. Some of the first North American settlers with Rowcliffe name or one of its variants:

Rowcliffe Settlers in United States in the 19th Century

Rowcliffe Settlers in United States in the 20th Century

Rowcliffe Settlers in Canada in the 19th Century

Rowcliffe Settlers in Canada in the 20th Century

Rowcliffe Settlers in Australia in the 19th Century