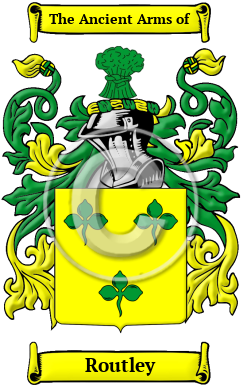 Early Origins of the Routley family

The surname Routley was first found in Cumberland, at Routledge where three eminent historians claimed the place at one time existed. [1] However, modern maps cannot find the locale.

Early History of the Routley family

Spelling variations of this family name include: Rutledge, Routlege, Routlidge, Routledge, Rutlidge and many more.

Another 42 words (3 lines of text) are included under the topic Early Routley Notables in all our PDF Extended History products and printed products wherever possible.

Migration of the Routley family to Ireland

Some of the Routley family moved to Ireland, but this topic is not covered in this excerpt.
Another 84 words (6 lines of text) about their life in Ireland is included in all our PDF Extended History products and printed products wherever possible.

Routley migration to the United States +

Routley Settlers in United States in the 19th Century

Routley Settlers in Australia in the 19th Century