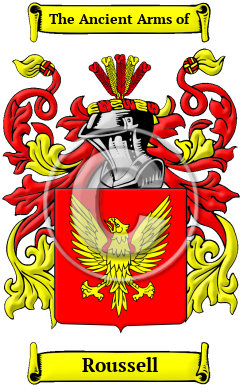 Early Origins of the Roussell family

The surname Roussell was first found in Burgundy (French: Bourgogne), an administrative and historical region of east-central France where the family has been traced from ancient times.

For the next several centuries the family prospered and branched to Dauphiné where they held the lands and titles of Counts of Roussilon. In Dauphiné the family again branched and held the lands of Anjo and Annonay. During the 17th century, branches formed in Toulouse and Languedoc where many members intermarried with the distinguished families of those regions, such was the case in Languedoc on 6th October 1827, where the family head, in recognition for his dedication to the King and country, was awarded letters patent confirming his nobility on the day of his marriage.

Early History of the Roussell family

Another 30 words (2 lines of text) are included under the topic Early Roussell Notables in all our PDF Extended History products and printed products wherever possible.

Roussell migration to the United States +

Roussell Settlers in United States in the 18th Century

Roussell Settlers in United States in the 19th Century

Roussell Settlers in United States in the 20th Century

Roussell Settlers in Australia in the 19th Century