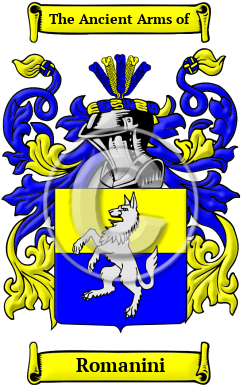 Early Origins of the Romanini family

The surname Romanini was first found in Naples, (Italian: Napoli, Latin: Neapolis) where Alatrino Romano became Baron of the city of Naples in 1286. An admiral bearing the name of Romano lived around the year 1316. He was promoted to this rank by King Roberto D'Angi.

Early History of the Romanini family

This web page shows only a small excerpt of our Romanini research. Another 57 words (4 lines of text) covering the years 1484, 1490, 1546, 1654 and 1718 are included under the topic Early Romanini History in all our PDF Extended History products and printed products wherever possible.

Surnames that originated in Italy are characterized by an enormous number of spelling variations. Some of these are derived from regional traditions and dialects. Northern names, for instance, often end in "o", while southern names tend to end in "i". Other variations come from the fact the medieval scribes tended to spell according to the sound of words, rather than any particular set of rules. The recorded variations of Romanini include Romano, Romani, Romàn, Romanèlli, Romanelli, Romanello, Romanèllo, Romaniéllo, Romanéti, Romanetti, Romanini, Romanino, Romanin, Romanucci, Romanazzi, Romanatti, Romanuto and many more.

Prominent among members of the family was Girolamo Romano, born in Brescia in 1484 whose paintings are on display today all over Europe and the United States; Giulio Romano (c. 1490-1546), a painter and architect born in Rome, who worked and studied under the famous Renaissance artist Raphael. Giulio designed a villa for Cardinal Giulio de'Medici and was a court...
Another 59 words (4 lines of text) are included under the topic Early Romanini Notables in all our PDF Extended History products and printed products wherever possible.

Migration of the Romanini family