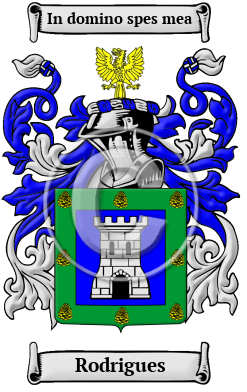 The prestigious surname Rodrigues originated in Spain, a country which has figured prominently in world affairs for hundreds of years. The name is patronymic in origin, deriving from the name of the father of the initial bearer, and its roots can be traced back to the Visigoths, the Germanic tribe who ruled Spain between the mid-5th and early 8th centuries. Rodrigues is derived from the Germanic personal name "Hrodric," which is composed of the elements "hrod," meaning "renown," and "ric," meaning "power." Thus, the name Rodrigues combines this personal name with the patronymic suffix "-ez," and refers to "a famous ruler."

Early Origins of the Rodrigues family

The surname Rodrigues was first found in Castile, where the name originated in Visigothic times.

Early History of the Rodrigues family

Prominent among members of the family were Pedro Ruiz de Guzmán, majordomo of King Alfonso IX in 1194; Gonzalo Ruiz, who took over the same post in 1199; Rodrigo Rodríguez, Count of Castile in 1228; Gonzalo Ruiz de Cieza, a fourteenth century nobleman; Gonzalo Ruiz de Toledo, Count of Orgaz and Chancellor of Castile in the early 1300s; Juan Ruiz, Archpriest of Hita and author of the medieval Spanish masterpiece, "Libro de buen amor"; Gonzalo Rodríguez, poet and...
Another 78 words (6 lines of text) are included under the topic Early Rodrigues Notables in all our PDF Extended History products and printed products wherever possible.

Rodrigues migration to the United States +

Rodrigues Settlers in United States in the 18th Century

Rodrigues Settlers in United States in the 19th Century

Rodrigues Settlers in West Indies in the 18th Century