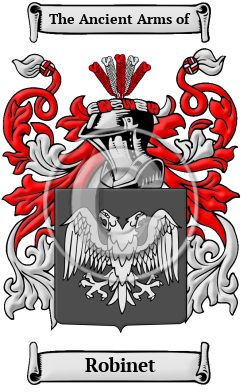 Early Origins of the Robinet family

The surname Robinet was first found in Brittany where this distinguished family held a family seat in the seigneurie of Plessix where they were members of the aristocracy in that region.

Early History of the Robinet family

This web page shows only a small excerpt of our Robinet research. Another 56 words (4 lines of text) covering the years 1655, 1700, 1735 and 1820 are included under the topic Early Robinet History in all our PDF Extended History products and printed products wherever possible.

Notable amongst this name at this time was Joseph Robineau (or Robinau) de Villebon (1655-1700), Quebec-born, French educated Governor of Acadia. He built the capital at Fort Nashwaak and was able to maintain the New England-Acadia...
Another 35 words (2 lines of text) are included under the topic Early Robinet Notables in all our PDF Extended History products and printed products wherever possible.

In France, the name Robinet is the 819th most popular surname with an estimated 6,202 people with that name. [4]

Robinet migration to the United States +

Robinet Settlers in United States in the 17th Century

Robinet Settlers in United States in the 18th Century