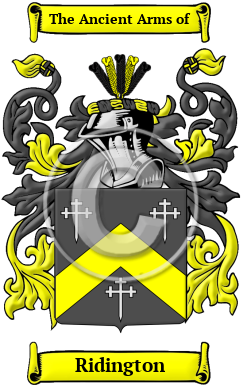 Early Origins of the Ridington family

The surname Ridington was first found in West Lancashire at Wrightington, a township, in the parish of Eccleston, union of Wigan, hundred of Leyland. "This was a member of the extensive barony of Manchester. The lordship was given by Albert de Gresley to Orm, son of Ailward or Edward, progenitor of the Ashtons, of Ashton; and his descendants were called de Wrightington. Robert Dicconson, of Eccleston, married Anne, daughter of John Wrightington, and was grandfather of William, who was convicted of high treason in the reign of William III. " [1]

Ridlington, Norfolk dates back to the Domesday Book of 1086 when it was known as Ridlinketuna [4] and in Leicestershire, that parish was recorded Redlinctune at that time. [4] [5]

The truncated for of the name which is typically spelt Reading, Ridding, Riding, etc., claims Lancashire as their ancient homestead too, for it is there that Grifin del Ruding was listed in the Assize Rolls of 1246. [6]

Early History of the Ridington family

Another 26 words (2 lines of text) are included under the topic Early Ridington Notables in all our PDF Extended History products and printed products wherever possible.

Migration of the Ridington family