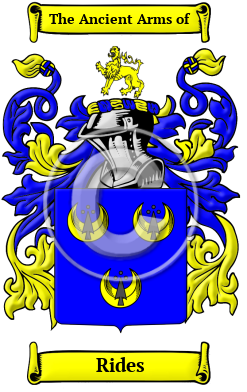 Early Origins of the Rides family

The surname Rides was first found in the West Riding of Yorkshire at Ryther, a parish, partly in the Upper, but chiefly in the Lower, division of the wapentake of Barkstone-Ash. [1]

The surname was also an occupational name for "a rider, trooper." [2] Another source explores the occupation more: "a forest officer, being mounted, and having the supervision of a large district." [3]

As far as early entries of the family, here are a few of them with various early spellings as listed in the Hundredorum Rolls of 1273: Roger le Ridere in Cambridgeshire; Stephen le Ridere and Adam le Rydere in Huntingdonshire. [2]

Early History of the Rides family

Spelling variations of this family name include: Ryder, Rider, Ryther and others.

Notables of the family at this time include Sir William Ryder or Rither (1544-1611), English politician, Lord Mayor of London in 1600, grandson of Thomas Ryther of Lynstead in Kent, and son of Thomas Ryther or Ryder of Mucklestone, Staffordshire. [5] John Rider or Ryder (1562-1632), was an English lexicographer and Bishop of Killaloe, born at Carrington, Cheshire. He was educated at Jesus College, Oxford, where he graduated B.A. in 1581 and M.A. in 1583. From 1597 to 1615 Rider was rector of Winwick, Lancashire. At the same date as he received the appointment he became dean of St. Patrick's Cathedral, Dublin...
Another 124 words (9 lines of text) are included under the topic Early Rides Notables in all our PDF Extended History products and printed products wherever possible.

Migration of the Rides family to Ireland

Some of the Rides family moved to Ireland, but this topic is not covered in this excerpt.
Another 107 words (8 lines of text) about their life in Ireland is included in all our PDF Extended History products and printed products wherever possible.

Rides migration to the United States +

Rides Settlers in United States in the 19th Century