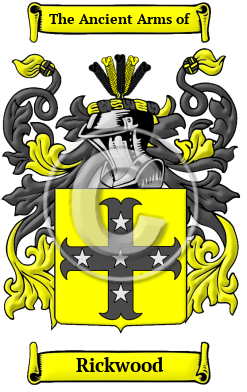 Early Origins of the Rickwood family

The surname Rickwood was first found in Berkshire, where they held a family seat as Lords of the Manor. The Saxon influence of English history diminished after the Battle of Hastings in 1066. The language of the courts was French for the next three centuries and the Norman ambience prevailed. But Saxon surnames survived and the family name was first referenced in the year 1191 when Richewardus de Westberi held estates in that county.

Early History of the Rickwood family

This web page shows only a small excerpt of our Rickwood research. Another 85 words (6 lines of text) covering the years 1275, 1455, 1487, 1510 and 1558 are included under the topic Early Rickwood History in all our PDF Extended History products and printed products wherever possible.

Before English spelling was standardized a few hundred years ago, spelling variations of names were a common occurrence. Elements of Latin, French and other languages became incorporated into English through the Middle Ages, and name spellings changed even among the literate. The variations of the surname Rickwood include Record, Ricord, Rickward, Rikecord, Rikeworth, Rickworth, Rykeward, Rickward, Rickword, Rickwood, Rickcord, Records and many more.

Distinguished members of the family include Robert Recorde (1510-1558), Welsh physician & mathematician. "Born of a good family at Tenby in Pembroke, his father was Thomas Recorde. Though the greatest part of his time...
Another 34 words (2 lines of text) are included under the topic Early Rickwood Notables in all our PDF Extended History products and printed products wherever possible.

Rickwood migration to the United States +

Rickwood Settlers in United States in the 19th Century

Rickwood Settlers in Canada in the 19th Century