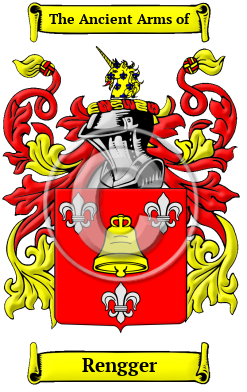 The Rengger surname in England is thought to have arisen from two distinct sources. It evolved from the Norman personal name Reinger, or Rainger, which is composed of the Germanic elements "ragin," meaning "advice," and "ger," meaning a "spear." It also evolved from Old English "hringanas," meaning "a ring" and from the Middle English "ringen," meaning "to ring," an occupational name for a maker of rings, or perhaps for a bell ringer. [1] [2]

Early Origins of the Rengger family

The surname Rengger was first found in Suffolk where Hugo le Ringere was listed in the Curia Regis Rolls of 1207. Richard le Wringar was listed in the Subsidy Rolls of Sussex in 1327. [3] Richard Renger was lord Mayor of London (1222-1226) and again in 1238.

Early History of the Rengger family

This web page shows only a small excerpt of our Rengger research. Another 49 words (4 lines of text) covering the years 1147, 1207, 1221, 1318, 1752 and 1821 are included under the topic Early Rengger History in all our PDF Extended History products and printed products wherever possible.

Spelling variations of this family name include: Ring, Ringer, Ringere, Rynger and others.

More information is included under the topic Early Rengger Notables in all our PDF Extended History products and printed products wherever possible.

Migration of the Rengger family