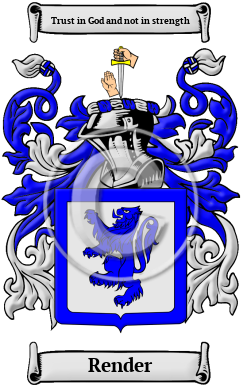 Early Origins of the Render family

The surname Render was first found in Berwickshire at Renton, in the parish of Coldingham. "The Rentons of Renton were hereditary foresters of Coldingham in the reign of William the Lion, and Ricardus forestarius appears in record as Ricardus de Reningtona. In the fourteenth century the Rentons were an influential family of burgesses in Berwick. During the fifteenth century the family terminated in the direct line in a daughter who married Ellem of Ellemsford. Robert de Rentun witnessed a charter by Herbert, abbot of Kelso, c. 1225. Symon of Rennyngton, burgess of Jedburgh, rendered homage in 1296 (Bain, II, p. 197). John de Raynton who had a charter of lands of Over Lamberton in 1323 is probably the John de Rainton (Rayntoun, or Rayneton) who was burgess and customar of Berwick in 1325 and following years and c. 1332 received a charter of lands in Kirckambirton." [1]

In England, the Hundredorum Rolls of 1273 include: Mathew de Renedon, or Reneton, Devon; and Robert de Reyndon, Warwickshire. [2]

Early History of the Render family

During the era when a person's name, tribe and posterity was one of his most important possessions, many different spellings were found in the archives examined. Render occurred in many references, and spelling variations of the name found included Renton, Wrenton, Rentin, Renten, Wrenten, Wrentin and others.

Another 32 words (2 lines of text) are included under the topic Early Render Notables in all our PDF Extended History products and printed products wherever possible.

In the United States, the name Render is the 9,781st most popular surname with an estimated 2,487 people with that name. [3]

Render migration to the United States +

Gradually becoming disenchanted with life in Ireland many of these uprooted families sailed aboard the armada of sailing ships known as the "White Sails" which plied the stormy Atlantic. These overcrowded ships often arrived with only 60 to 70% of their original passenger list, many dying of illness and the elements, were buried at sea. In North America, early immigrants bearing the family name Render, or a spelling variation of the surname include:

Render Settlers in United States in the 19th Century

Render Settlers in United States in the 20th Century

Render Settlers in Canada in the 19th Century

Render Settlers in Australia in the 19th Century