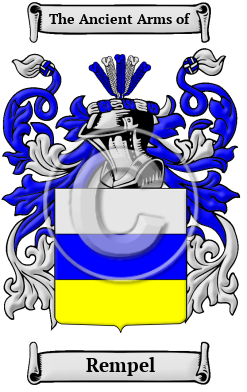 The roots of the German surname Rempel lie in the former duchy of Silesia, now part of Poland. The name means, simply, "son of Rempel," and was a popular first name in Silesia during the Middle Ages.

Early Origins of the Rempel family

The surname Rempel was first found in Silesia, where it first emerged as a personal name. The first recorded bearer of Rempel as a first name was Rempel v. Nymancz, who lived in Glatz in 1350. The first instance of Rempel as a surname occurred in Breslau, where Matern Rempel was living in 1347. The young Rempel family was instrumental during these early times, playing an important role in the development of medieval German society.

Early History of the Rempel family

This web page shows only a small excerpt of our Rempel research. Another 112 words (8 lines of text) covering the years 1347, 1815, 1868 and 1856 are included under the topic Early Rempel History in all our PDF Extended History products and printed products wherever possible.

Spelling variations of this family name include: Rempel, Remple, Remplin, Remp, Rempe and others.

More information is included under the topic Early Rempel Notables in all our PDF Extended History products and printed products wherever possible.

In Canada, the name Rempel is the 686th most popular surname with an estimated 7,616 people with that name. [1]

Rempel migration to the United States +

Rempel Settlers in United States in the 19th Century

Rempel Settlers in Canada in the 19th Century