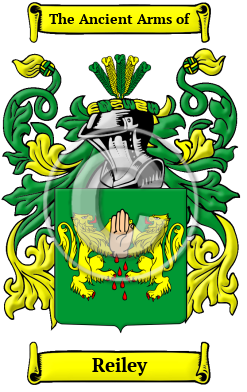 The Reiley surname originally appeared in Gaelic as O Raghailligh, which means descendant of Raghallach.

Early Origins of the Reiley family

The surname Reiley was first found in County Cavan. They were known as the Princes of East Breffny, descended from Raghallaigh, Prince of Breffny in 981. They maintained their territory during the Anglo/Norman invasion of Strongbow, Earl of Pembroke, in 1172, but Sir John O'Reilly, Prince of Breffny surrendered the principality to Queen Elizabeth I thereby ensuring that his territories remained intact.

Early History of the Reiley family

The Middle Ages saw a great number of spelling variations for surnames common to the Irish landscape. One reason for these variations is the fact that surnames were not rigidly fixed by this period. The following variations for the name Reiley were encountered in the archives: O'Reilly, O'Reilley, O'Reily, O'Rielly, O'Riely, O'Riley, O'Rilley, Reel and many more.

Notable amongst the family name at this time was Count John O'Reilly; Edmund O'Reilly (1598-1669), Roman Catholic Archbishop of Armagh; Hugh Reily (Reilly or O’Reilly) (c.1630-1695) Irish Member of Parliament for Cavan Borough in the Patriot Parliament of 1689; Philip Og O’Reilly (Gaelic was Phillip Óg O’Raghallaigh)(c.1640-1703), Irish...
Another 48 words (3 lines of text) are included under the topic Early Reiley Notables in all our PDF Extended History products and printed products wherever possible.

In the United States, the name Reiley is the 16,031st most popular surname with an estimated 2,487 people with that name. [1]

Reiley migration to the United States +

Death and immigration greatly reduced Ireland's population in the 19th century. For the native Irish people poverty, hunger, and racial prejudice was common. Therefore, thousands left their homeland to seek opportunity in North America. Those who survived the journey and the quarantine camps to which they arrived, were instrumental towards building the strong developing nations of the United States and the future Canada. By far, the largest influx of Irish settlers occurred with Great Potato Famine during the late 1840s. These were employed as construction or factory workers. An examination of passenger and immigration lists has shown early immigrants bearing the name Reiley:

Reiley Settlers in United States in the 18th Century

Reiley Settlers in United States in the 19th Century

Reiley Settlers in Australia in the 19th Century

Reiley Settlers in New Zealand in the 19th Century