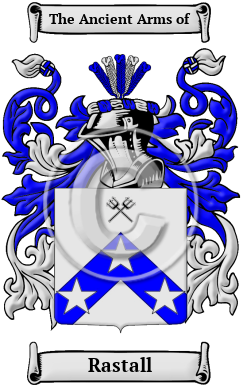 Early Origins of the Rastall family

The surname Rastall was first found in Dauphiny (French: Dauphiné or Dauphiné Viennois), a former province in southeastern France, where this distinguished family held a family seat since ancient times.

Early History of the Rastall family

Notable amongst the family at this time was John Rastell (died 1536), English printer and lawyer who is thought to have been born in London, and educated at Oxford; John Rastell (1532-1577), English...
Another 33 words (2 lines of text) are included under the topic Early Rastall Notables in all our PDF Extended History products and printed products wherever possible.

Migration of the Rastall family

Some of the first settlers of this family name or some of its variants were: Humphrey Rastell who settled in Maine in 1624; Henry Rastell, aged 30; who settled in Virginia in 1635.