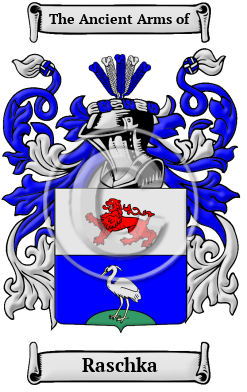 The Raschka surname is derived from the name Rasch, from the Middle High German word "rasch" meaning "quick," or "hot-headed;" as such, it may have originally been a nickname for a quick or rash person.

Early Origins of the Raschka family

The surname Raschka was first found in Silesia and Swedish Pomerania, where the name could be considered to have made a great contribution to the feudal society which became the backbone of modern Europe. The name became prominent due to this family's extensive land-holdings in the regions of Brandenburg and Saxony. Here, they became active in local affairs and branched into many houses which played important roles in the political struggles for economic supremacy, in which each group sought power and status in a constantly evolving territorial profile.

Early History of the Raschka family

Spelling variations of this family name include: Raschka, Rashke, Rashka, Raschki, Rashki, Raschau and others.

Notables of the period with the surname Raschka were Statius von Raschau, a first lieutenant in the army of the Duchy of Brunswick, who died in Moringen in 1625 at...
Another 30 words (2 lines of text) are included under the topic Early Raschka Notables in all our PDF Extended History products and printed products wherever possible.

Migration of the Raschka family