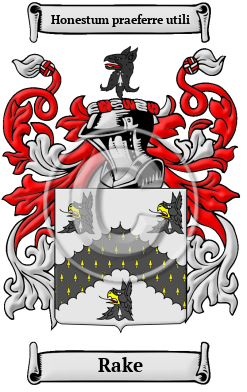 The origins of the Welsh name Rake go back to the ancient Celtic culture that existed in the hills and Moors of Wales. The forbears that initially held the name Rake once lived near a pass or narrow valley. The surname Rake is derived from the Old English word hraca, which means throat. The surname Rake belongs to the class of topographic surnames, which were given to people who resided near physical features such as hills, streams, churches, or types of trees. However, the surname Rake may be derived from residence at The Rake in Sussex, at Raikes Farm in Surrey, or at Raikes in the West Riding of Yorkshire. In this case, the surname Rake belongs to the category of habitation names, which are derived from pre-existing names for towns, villages, parishes, or farmsteads.

Early Origins of the Rake family

The surname Rake was first found in Lincolnshire, where they held a family seat from early times and their first records appeared on the early census rolls taken by the early Kings of Britain to determine the rate of taxation of their subjects.

Early History of the Rake family

This web page shows only a small excerpt of our Rake research. Another 94 words (7 lines of text) covering the years 1690 and 1757 are included under the topic Early Rake History in all our PDF Extended History products and printed products wherever possible.

Although there are not an extremely large number Welsh surnames, there are an inordinately large number of spelling variations of those surnames. This variety of spellings began almost immediately after the acceptance of surnames within Welsh society. As time progressed, these old Brythonic names were eventually were recorded in English. This process was problematic in that many of the highly inflected sounds of the native language of Wales could not be properly captured in English. Some families, however, did decide to modify their own names to indicate a branch loyalty within the family, a religious adherence, or even a patriotic affiliation. The name Rake has seen various spelling variations: Raikes, Raike, Raik, Rakes, Rake and others.

More information is included under the topic Early Rake Notables in all our PDF Extended History products and printed products wherever possible.

Rake migration to the United States +

In the late 19th and early 20th centuries, many people from Wales joined the general migration to North America in search of land, work, and freedom. These immigrants greatly contributed to the rapid development of the new nations of Canada and the United States. They also added a rich and lasting cultural heritage to their newly adopted societies. Investigation of immigration and passenger lists has revealed a number of people bearing the name Rake:

Rake Settlers in United States in the 19th Century

Motto: Honestum praeferre utili
Motto Translation: To prefer the honest to the profitable.