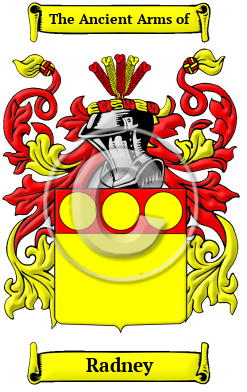 Early Origins of the Radney family

The surname Radney was first found in Radnorshire (Welsh: Sir Faesyfed), a former historic county of mid-Wales, anciently part of the kingdom of Powys, where they held a family seat. The Celtic resistance north and south along the border of Wales and England was considerably increased after the Battle of Hastings in 1066. The Normans met more resistance from the Welsh than in the rest of England. The Welsh fought from behind their hills and mountains and tenaciously held their ground. Finally, Edward 1st, to placate this founding nation, conferred the principality of Wales upon his eldest son, who became Edward II. This brought Wales into England as an equal while the King was alive, and integral part of the royal title when on the throne. Edward III confirmed and all Princes of Wales were presented to the Welsh people at Caernarvon Castle. The language of the courts was French for the next three centuries and the Norman ambience prevailed. But Welsh surnames survived and the family name was first referenced in the year 1193 when John Radenoura held estates in Radnor and Herefordshire. They were allied by marriage to the Ap Reese of Washingly.

Early History of the Radney family

This web page shows only a small excerpt of our Radney research. Another 103 words (7 lines of text) covering the years 1255, 1260, 1398, 1455, and 1487 are included under the topic Early Radney History in all our PDF Extended History products and printed products wherever possible.

More information is included under the topic Early Radney Notables in all our PDF Extended History products and printed products wherever possible.

Migration of the Radney family

Some of the first settlers of this family name or some of its variants were: settlers who were recorded from the mid 17th century in the great migration from Europe. Migrants settled in the eastern seaboard from Newfoundland, to Maine, to Virginia, the Carolinas, and to the islands. A colony of Welsh gathered in Pennsylvania..