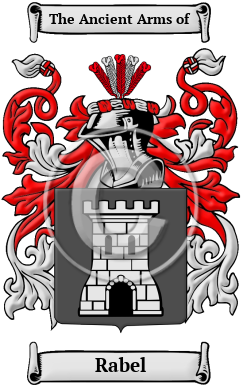 The noble French surname Rabel is of occupational origin, and is derived from the trade or profession pursued by the original bearer of the name. In this instance, the surname Rabel was applied to one who was engaged in the restoration and reconstruction of buildings and any other repair work, so called from the French "rabelir, abellir" meaning "repairer."

Early Origins of the Rabel family

The surname Rabel was first found in the region of Brittany, in the north of France, where the family held lands and estates for centuries.

Early History of the Rabel family

This web page shows only a small excerpt of our Rabel research. Another 74 words (5 lines of text) covering the years 1483, 1494, 1553, 1547 and 1622 are included under the topic Early Rabel History in all our PDF Extended History products and printed products wherever possible.

Notable amongst this name at this time was François Rabelais (born between 1483 and 1494-1553), a French Renaissance writer, physician, Renaissance humanist, monk and Greek scholar. He is primarily known as a writer of satire, of the grotesque, and of bawdy...
Another 40 words (3 lines of text) are included under the topic Early Rabel Notables in all our PDF Extended History products and printed products wherever possible.

Rabel migration to the United States +

Rabel Settlers in United States in the 18th Century

Rabel Settlers in United States in the 19th Century

Historic Events for the Rabel family +