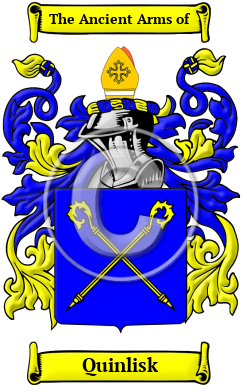 Early Origins of the Quinlisk family

The surname Quinlisk was first found in Tipperary and Offaly. The Annals of Loch Ce record the slaying of the eminent historian Domhnall O Cuindlis by the O'Concannons in 1342. Around 1400, Murchadh O Cuindlis was the scribe of The Red Book of Munster and part of The Yellow Book of Lecan. Cornelius O Cunlis was a bishop in Clonfert from 1448-1463.

Early History of the Quinlisk family

This web page shows only a small excerpt of our Quinlisk research. More information is included under the topic Early Quinlisk History in all our PDF Extended History products and printed products wherever possible.

More information is included under the topic Early Quinlisk Notables in all our PDF Extended History products and printed products wherever possible.

Quinlisk migration to the United States +

Quinlisk Settlers in United States in the 19th Century