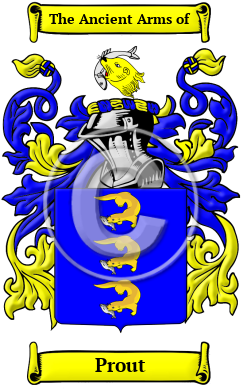 Early Origins of the Prout family

The surname Prout was first found in Bedfordshire where some of the first records of the family were listed in the Hundredorum Rolls of 1273: Hugh le Proude; and Robert le Proud. The same rolls listed: John Prude in Buckinghamshire; Cristina le Prute in Oxfordshire; and Herbert le Prute in Wiltshire. [1]

Two sources postulates that the name was "perhaps from Old English personal name Prud, and perhaps connected with Pryde." [2] [3]

Early History of the Prout family

This web page shows only a small excerpt of our Prout research. Another 139 words (10 lines of text) covering the years 1348, 1409, 1391, 1394, 1783 and 1852 are included under the topic Early Prout History in all our PDF Extended History products and printed products wherever possible.

Spelling variations of this family name include: Proud, Proude, Prout, Prowd and others.

Another 44 words (3 lines of text) are included under the topic Early Prout Notables in all our PDF Extended History products and printed products wherever possible.

In the United States, the name Prout is the 11,974th most popular surname with an estimated 2,487 people with that name. [4]

Prout migration to the United States +

Prout Settlers in United States in the 17th Century

Prout Settlers in United States in the 19th Century

Prout Settlers in United States in the 20th Century

Prout Settlers in Canada in the 18th Century

Prout Settlers in Australia in the 19th Century

Prout Settlers in New Zealand in the 19th Century

Prout Settlers in West Indies in the 17th Century

Historic Events for the Prout family +