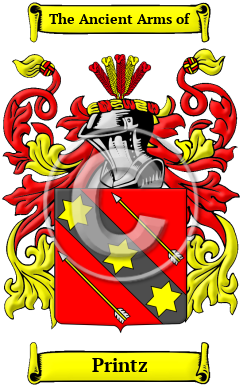 Early Origins of the Printz family

The surname Printz was first found in Silesia, where the family became noted for its many branches within the region. Some houses of the name even acquired status and influence which rivaled that of the landed aristocracy. In their later history some branches were elevated to the ranks of nobility as they distinguished themselves through their contributions to the social, political, and economic developments of the nation. Like many surnames, the name Printz began as a nickname, from the German "prinz," meaning "prince." The nickname may have been given to one who had a princely demeanor, or it may have been an honorary "title" won in some contest of skill.

Early History of the Printz family

Spelling variations of this family name include: Printz, Prinz, Prinsze and others.

Another 50 words (4 lines of text) are included under the topic Early Printz Notables in all our PDF Extended History products and printed products wherever possible.

In the United States, the name Printz is the 17,185th most popular surname with an estimated 2,487 people with that name. [1]

Printz migration to the United States +

Printz Settlers in United States in the 17th Century

Printz Settlers in United States in the 18th Century

Printz Settlers in United States in the 19th Century