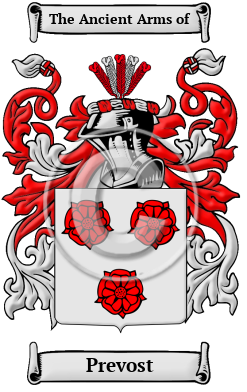 The surname Prevost is a ancient French name. It was a name given to a person from Brittany who was a prefect or chief magistrate. [1] Looking back even further, we found the name was originally derived from the Old French word, "prevost", which signified someone of that title. [2]

Early Origins of the Prevost family

The surname Prevost was first found in Brittany (French: Bretagne) where this noble family originated in ancient times.

Lords of Bonneseaux are cited in 1427 and maintained nobility of ancient extraction in 1669. The name was also found in Montreuil in the 18th century with a group of Lords from Bourgogne and a Commissioner General in the Navy. [1]

François Prevost, born in 1638, son of Charles and Jeanne, was the Major of the Château Saint-Louis and Governor of Trois-Rivières. He married Geneviève Macard, daughter of Nicolas and Marguerite, in the province of Quebec on 1st August 1679. They remained together in Quebec until François passed away on 5th June 1702. [3]

Early History of the Prevost family

The many different spellings of French surnames can be partially explained by the use of local dialects and by the influence of other languages during the early development of the French language. As a result of these linguistic and cultural influences, the name Prevost is distinguished by a number of regional variations. The many spelling variations of the name include Prévost, Prévoste, Prévosts, Prévostes, Prévaust, Prévauste, Prévaustes, Prévausts, de Prévost, du Prévost and many more.

Notable amongst this name at this time was Louis-Constant Prévost-Paradol, journalist, Man of Letters, member of the French Academy; Françoise Prévost (c. 1680-1741), a French ballerina; François Provost (1638-1702), French-born...
Another 29 words (2 lines of text) are included under the topic Early Prevost Notables in all our PDF Extended History products and printed products wherever possible.

Prevost migration to the United States +

France finally gave land incentives for 2,000 migrants during the 1700s. Early marriage was encouraged in New France, and youths of 18 took fourteen-year-old girls for their wives. The fur trade was developed and attracted migrants, both noble and commoner from France. 15,000 explorers left Montreal in the late 17th and 18th centuries, leaving French names scattered across the continent. The search for the Northwest passage continued. Migration from France to New France or Quebec, as it was now more popularly called, continued until 1759. By 1675, there were 7000 French in Quebec. By the same year the Acadian presence in Nova Scotia, New Brunswick and Prince Edward Island had reached 500. In the treaty of Utrecht, the Acadians were ceded by France to Britain in 1713. In 1755, 10,000 French Acadians refused to take an oath of allegiance to England and were deported. They found refuge in Louisiana. Meanwhile, in Quebec, the French race flourished, founding in Lower Canada, one of the two great solitudes which became Canada. Many of this distinguished family name Prevost were prominent in social, cultural, religious and political affairs in France and New France. Amongst the settlers in North America with this distinguished name Prevost were

Prevost Settlers in United States in the 17th Century

Prevost Settlers in United States in the 18th Century

Prevost Settlers in United States in the 19th Century

Prevost Settlers in Canada in the 17th Century

Prevost Settlers in Canada in the 18th Century

Prevost Settlers in West Indies in the 17th Century