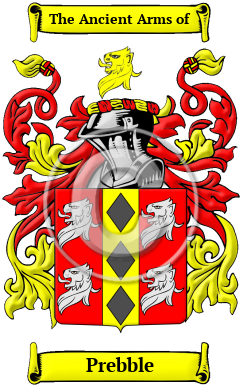 The name Prebble may or may not predate the Norman invasion of Britain in 1066. It has been suggested that this name is derived from the name of a French town of Preville.

Early Origins of the Prebble family

The surname Prebble was first found in Kent; however early records of the name are scarce. Although they are probably not related, it is interesting to note that there is a record of a John Pridel in 1320 in the "Petre Documents."

Early History of the Prebble family

This web page shows only a small excerpt of our Prebble research. Another 62 words (4 lines of text) covering the years 1327, 1585, and 1641 are included under the topic Early Prebble History in all our PDF Extended History products and printed products wherever possible.

More information is included under the topic Early Prebble Notables in all our PDF Extended History products and printed products wherever possible.

Prebble migration to the United States +

Prebble Settlers in United States in the 19th Century

Prebble Settlers in Canada in the 19th Century

Prebble Settlers in New Zealand in the 19th Century