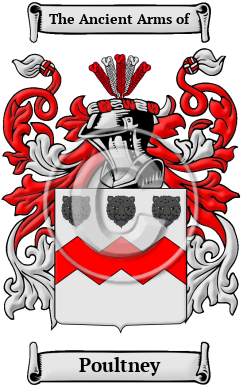 Early Origins of the Poultney family

The surname Poultney was first found in Leicestershire where they held a family seat as Lords of the Manor. Conjecturally, the surname is descended from the tenant of the lands of Poultney, held by Ralph from the Bishop of Lincoln, who was recorded in the Domesday Book census of 1086.

One of the first records of the family was Sir John de Pulteney or Poultney (died 1349). He was Mayor of London, son of Adam Neale de Clipston of Weston, Sussex, and grandson of Hugh de Pulteney, of Pulteney, Poutenei, or Pultonheith, in Misterton, Leicestershire. "His father succeeded to the estate at Pulteney in 1308, and had married Maud de Napton. John de Pulteney was mainpernor for certain merchants on 9 Nov. 1316, and is mentioned as a citizen of London on 5 May 1322. He was Mayor of London in 1331 and 1332." [1]

Early History of the Poultney family

Outstanding amongst the family at this time was Sir William Pulteney (1624-1691), an English Member of Parliament for Westminster (1679-1681); William Pulteney, 1st Earl of Bath, PC (1684-1764), an English politician descended from an...
Another 34 words (2 lines of text) are included under the topic Early Poultney Notables in all our PDF Extended History products and printed products wherever possible.

Poultney migration to the United States +

Poultney Settlers in United States in the 17th Century

Poultney Settlers in United States in the 19th Century

Poultney Settlers in United States in the 20th Century

Poultney Settlers in Australia in the 19th Century

Historic Events for the Poultney family +