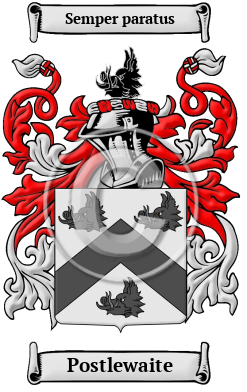 The Postlewaite surname is thought to derive from a place name, most likely from Postlewaite in the Parish of Millom, Cumberland. The place name comes from and Old English personal name Possel or Postel, combined with "thwaite," which means "a clearing."

Early Origins of the Postlewaite family

The surname Postlewaite was first found in Cumberland, where they held a family seat as Lords of the Manor. The family appear from ancient documents to have held lands in various parts of Cumberland from an early period. The original name came from Possel or Postel's clearing, a thwaite being a clearing. In time, the 'thwaite' was corrupted to 'white' and some of the family name still prefer this spelling.

Early History of the Postlewaite family

This web page shows only a small excerpt of our Postlewaite research. Another 100 words (7 lines of text) covering the years 1780, 1809, 1650 and 1713 are included under the topic Early Postlewaite History in all our PDF Extended History products and printed products wherever possible.

Another 36 words (3 lines of text) are included under the topic Early Postlewaite Notables in all our PDF Extended History products and printed products wherever possible.

Postlewaite migration to the United States +

Postlewaite Settlers in United States in the 18th Century