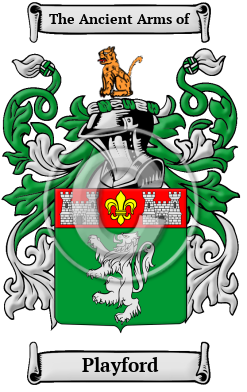 The Playford surname is a habitation name derived from a place name in Suffolk. The place name in turn comes from the Old English word "plega," meaning "sport" and "ford," referring to a ford in a river. Perhaps the place was originally a site of sporting contests; however any evidence of this has been lost over time.

Early Origins of the Playford family

The surname Playford was first found in Suffolk where the first on record is Fulcher de Pleiforda, listed in the Pipe Rolls of Suffolk in 1130.

Early History of the Playford family

This web page shows only a small excerpt of our Playford research. Another 85 words (6 lines of text) covering the years 1290, 1596, 1608, 1623, 1686 and 1651 are included under the topic Early Playford History in all our PDF Extended History products and printed products wherever possible.

Spelling variations of this family name include: Playford, Playforde and others.

Another 36 words (3 lines of text) are included under the topic Early Playford Notables in all our PDF Extended History products and printed products wherever possible.

Playford Settlers in Canada in the 19th Century

Playford Settlers in Australia in the 19th Century