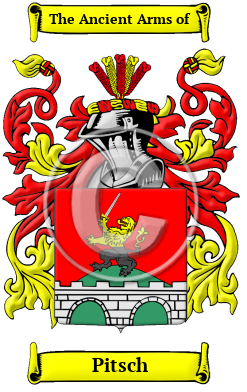 The distinguished German surname Pitsch is of Polish origin. It is derived from "Pies," a diminutive of the personal name "Peterchen," and means "son of Pies." The name was brought into Germany at an early stage, and has become quite widespread.

Early Origins of the Pitsch family

The surname Pitsch was first found in Silesia, where the name is thought to have entered into Germany from Poland. The personal name could be found in Silesia as early as 1372, when Petsche Seiler was recorded to be living in Liegnitz. The first records of the surname are slightly more recent; Bartel Pitsch was a resident of the city of Görlitz in 1504. The young Pitsch family was instrumental during this early period, and contributed greatly to the development of medieval Silesian society.

Early History of the Pitsch family

Spelling variations of this family name include: Pietsch, Pitsch, Petsch, Pietsh, Petch, Pitch and others.

Another 32 words (2 lines of text) are included under the topic Early Pitsch Notables in all our PDF Extended History products and printed products wherever possible.

Pitsch migration to the United States +

Pitsch Settlers in United States in the 19th Century