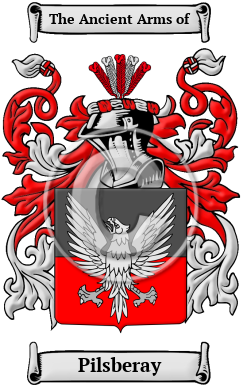 Early Origins of the Pilsberay family

The surname Pilsberay was first found in Pilsbury, a hamlet in Derbyshire that dates back to the Domesday Book of 1086 where it was first listed as Pilsberie. [1] At that time, the lands were property of Henry de Ferrers (also known as Henri de Ferrières), a Norman soldier from a noble Norman family from Ferrières-Saint-Hilaire, Eure in Upper Normandy. He lost his brother William (Guillaume) in the battle but he survived to be granted 210 manors throughout England and Wales. The place name literally means "fortified place of a man called Pil," from the Old English personal name + "burh." [2] Pilsbury Castle was a Norman motte-and-bailey castle located nearby the village overlooking the River Dove.

Early History of the Pilsberay family

This web page shows only a small excerpt of our Pilsberay research. Another 105 words (8 lines of text) covering the years 1510, 1600 and 1137 are included under the topic Early Pilsberay History in all our PDF Extended History products and printed products wherever possible.

Spelling variations of this family name include: Pilbury, Pilsbury, Pillsbury, Pilesbury and others.

More information is included under the topic Early Pilsberay Notables in all our PDF Extended History products and printed products wherever possible.

Migration of the Pilsberay family

Some of the first settlers of this family name or some of its variants were: John Pilborow, who was on record in Annapolis, MD in 1685; and Daniel Pilborough, age 17, who came to Maryland or Virginia in 1719.