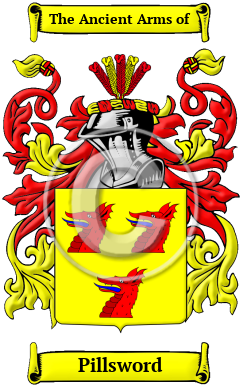 Early Origins of the Pillsword family

The surname Pillsword was first found in Lancashire at Pilsworth a township, in the chapelry of Unsworth, parish of Middleton, union of Bury, hundred of Salford. [1] On the banks of the Roche is a spot called the Castle, supposed to have been the site of a "peel," or fortified house; hence the name of the township, Peelworth or Pilsworth, "the district of the fortified house." The Saxon influence of English history diminished after the Battle of Hastings in 1066. The language of the courts was French for the next three centuries and the Norman ambience prevailed. But Saxon surnames survived and the family name was first referenced in the 13th century when they held estates in that shire.

Early History of the Pillsword family

This web page shows only a small excerpt of our Pillsword research. Another 82 words (6 lines of text) covering the years 1540, 1570, 1455, 1487, 1735, 1172 and 1604 are included under the topic Early Pillsword History in all our PDF Extended History products and printed products wherever possible.

Spelling variations of this family name include: Pilsworth, Pylsworth, Pillsworth, Pilsword and many more.

More information is included under the topic Early Pillsword Notables in all our PDF Extended History products and printed products wherever possible.

Migration of the Pillsword family to Ireland

Some of the Pillsword family moved to Ireland, but this topic is not covered in this excerpt.
Another 60 words (4 lines of text) about their life in Ireland is included in all our PDF Extended History products and printed products wherever possible.

Migration of the Pillsword family

Some of the first settlers of this family name or some of its variants were: William Pilsworth, who settled in Ontario in 1819; as well as Arthur Pilsworth, and Thomas Pilsworth, who were both naturalized in New York, NY in 1834..