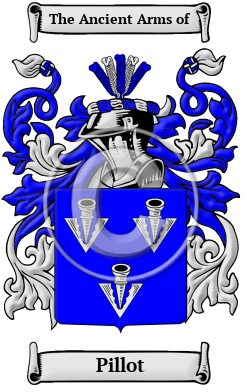 The Pillot surname comes from the Old French word "pilot," meaning a "stake," or "pile."

Early Origins of the Pillot family

The surname Pillot was first found in Burgundy (French: Bourgogne), an administrative and historical region of east-central France where they held a family seat at Chantrans, and this main stem of the family became a representative of the Bourgogne aristocracy.

Some of the family were found in in Brittany, where the Pillets were Lords of Hericzonnais descended from Pierre, ennobled in 1435, father of Jean, Secretary of the duke.

Early History of the Pillot family

This web page shows only a small excerpt of our Pillot research. Another 84 words (6 lines of text) covering the years 1809 and 1877 are included under the topic Early Pillot History in all our PDF Extended History products and printed products wherever possible.

More information is included under the topic Early Pillot Notables in all our PDF Extended History products and printed products wherever possible.

Pillot migration to the United States +

Pillot Settlers in United States in the 19th Century