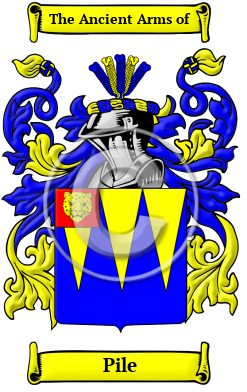 The Pile surname comes from the Middle English word "pile," meaning "stake," or "post," in turn from the Old English "pilum," meaning "javelin." As such, it was likely a topographic name for someone who lived near a landmark stake or post; or perhaps an occupational name for a maker of stakes.

Early Origins of the Pile family

The surname Pile was first found in Northumberland where they held a family seat as Lords of the Manor of Pyle, some say at the time of the Norman Conquest of England in 1066 by Duke William of Normandy.

Early History of the Pile family

Spelling variations of this family name include: Pyle, Pile, Pyll, Pyles, Pylie, Pilie, Pill and others.

Another 45 words (3 lines of text) are included under the topic Early Pile Notables in all our PDF Extended History products and printed products wherever possible.

Pile migration to the United States +

Pile Settlers in United States in the 17th Century

Pile Settlers in United States in the 18th Century

Pile Settlers in United States in the 19th Century

Pile Settlers in Australia in the 19th Century

Pile Settlers in West Indies in the 17th Century

Historic Events for the Pile family +