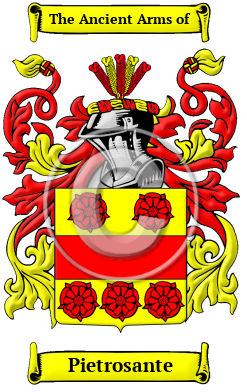 The distinguished surname Pietrosante can be traced back to the ancient and beautiful region of Venice. Although people were originally known only by a single name, it became necessary for people to adopt a second name to identify themselves as populations grew and travel became more frequent. The process of adopting fixed hereditary surnames was not complete until the modern era, but the use of hereditary family names in Italy began in the 10th and 11th centuries. Italian hereditary surnames were developed according to fairly general principles and they were characterized by a profusion of derivatives coined from given names. The most common type of family name found in the region of Venice is the patronymic surname, which is derived from the father's given name. During the Middle Ages, Italians adopted the patronymic system of name-making because it perfectly complemented the prevailing Feudal System. In Italy the popularity of patronymic type of surname is also due to the fact that during the Christian era, people often named their children after saints and biblical figures. The surname Pietrosante came from the personal name Pietro, or Peter, which is itself derived from the Greek word petrus meaning rock.

Early Origins of the Pietrosante family

The surname Pietrosante was first found in the city of Pavia, where records are found in 1040 with Manfredi and Arizzone Pietra, feudal Lords of the territories of Pietra, Bissone, and Costa.

Early History of the Pietrosante family

This web page shows only a small excerpt of our Pietrosante research. More information is included under the topic Early Pietrosante History in all our PDF Extended History products and printed products wherever possible.

Italian surnames have a surprising number of forms in comparison with other European surnames because they reflect the regional variations and the many dialects of the Italian language, each of which has its distinctive features. For example, in Northern Italy the most standard Italian surname suffix is "I", whereas in Southern Italy the most typical surname suffix is "O". Sardinian is very different from other forms of Italian and in fact, it is considered to be its own distinct language. Additionally, spelling changes frequently occurred because medieval scribes, church officials, and the bearers of names, spelled names as they sounded rather than according to any specific spelling rules. As a consequence of the major changes in the Italian language and in the local spellings of Italian surnames that occurred over the course of history, there are numerous variations for the surname Pietrosante. These spelling variations include Pietri, Petri, Petris, Pedri, Pieri, Pero, Pierri, Pierro, Perris, Peire, Peiro, Peyro, De Pietri, De Pietro, Di Pietro, Di Pietro, De Petris, De Pero, Depero, Di Pierro, Petrich, Petric, Petrovich, Petrovic, Perich and many more.

Prominent among bearers of this family in early times was Cecco di Pietro, (c. 1330-1402), Italian painter of the Pisan School, date of birth cannot be confirmed, some mention of working with the painter Paolo di Lazzarino in 1350; Francesco Petrarca, or Petrarch, considered to be one of the four great Italian poets, Born in Florence in the 14th century, one of his most famous poems is entitled "Il Canzoniere"; Other bearers of this name from this era include: Riccardo Petroni, a Cardinal in Siena in 1313; Cola Petruccioli, a painter in Perugia in 1401 whose works can be seen at...
Another 151 words (11 lines of text) are included under the topic Early Pietrosante Notables in all our PDF Extended History products and printed products wherever possible.

Migration of the Pietrosante family

Discovered in the immigration and passenger lists were a number of people bearing the name Pietrosante: Joseph Dipietro, who was a soldier Naturalized at Camp Pike, Arkansas in 1918, a Pieretto who arrived in New Orleans in 1822 at the age of 23, Lina Petri, who settled in Texas in 1861, Luigi Dipieto, who was Naturalized in Chautauqua County, New York in 1906, and August Petronella, who emigrated to Philadelphia in 1868.