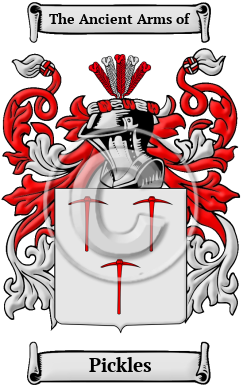 The name Pickles has a long Anglo-Saxon heritage. The name comes from when a family lived in Pickhall (Pickhill), a parish, in the union of Thirsk, partly in the wapentake of Allertonshire, but chiefly in that of Hallikeld, in the North Riding of Yorkshire. [1] [2] [3]

The place name dates back to the Domesday Book of 1086 when it was known as Picala and literally meant "nook of land by the pointed hills," from the Old English "pic" + "halh." [4]

However, another source has a slightly different point of origin, having the name mean: 'dweller at the small enclosure’, from the Middle English pightel, pighel. [5]

Early Origins of the Pickles family

The surname Pickles was first found in Yorkshire where early English rolls provide us a glimpse of the spelling variations used through Medieval times. The Yorkshire Poll Tax Rolls of 1379 included: Ricardus de Pighkeleys; and Stephanus de Pykedleghes. Bot resided "in the village of Haworth, in which district the two names are now so familiar. The Directory for Wilsden, West Riding of Yorks, contains the two following names, seemingly related: Nathan Pickles, beer-retailer; and Nathan Pighills, farmer." [6]

Later in Lancashire, Henry Pickles was listed there in 1571 and later again, Arthur Pickles was found in Yorkshire in 1672. [5]

Early History of the Pickles family

This web page shows only a small excerpt of our Pickles research. Another 48 words (3 lines of text) are included under the topic Early Pickles History in all our PDF Extended History products and printed products wherever possible.

Spelling variations in names were a common occurrence before English spelling was standardized a few hundred years ago. In the Middle Ages, even the literate spelled their names differently as the English language incorporated elements of French, Latin, and other European languages. Many variations of the name Pickles have been found, including Pickles, Pickel, Pickle, Pykelworthe, Pickleworth and others.

More information is included under the topic Early Pickles Notables in all our PDF Extended History products and printed products wherever possible.

In the United States, the name Pickles is the 13,188th most popular surname with an estimated 2,487 people with that name. [7]

Pickles migration to the United States +

Families began migrating abroad in enormous numbers because of the political and religious discontent in England. Often faced with persecution and starvation in England, the possibilities of the New World attracted many English people. Although the ocean trips took many lives, those who did get to North America were instrumental in building the necessary groundwork for what would become for new powerful nations. Some of the first immigrants to cross the Atlantic and come to North America bore the name Pickles, or a variant listed above:

Pickles Settlers in United States in the 17th Century

Pickles Settlers in United States in the 19th Century

Pickles Settlers in Canada in the 19th Century

Pickles Settlers in Australia in the 19th Century

Historic Events for the Pickles family +