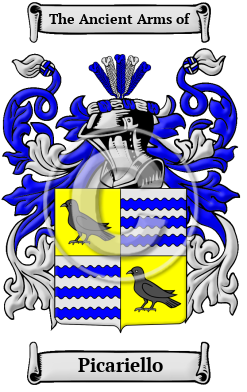 The name Picariello is derived from the central southern Italian word "pica" meaning a "magpie;" as such, it was likely originally a nickname for a gossipy or wordy person.

Early Origins of the Picariello family

The surname Picariello was first found in Treviso anciently Tarvisium, a town in Venetia, capital of the province of Treviso. The cathedral of San Pietro is notable and dates back to 1141. It is classical style with seven domes with works by many notable painters and sculptors. The Piazza dei Signori has many palaces. In the 6th century this town was a seat of a Lombard duke. Charlemagne held it. Later it was Venetian. In those ancient times only persons of rank, the podesta, clergy, city officials, army officers, artists, landowners were entered into the records. To be recorded at this time, at the beginning of recorded history, was of itself a great distinction and indicative of noble ancestry. The name is taken from Picardy, a region in Northern France; it would have been given to a man who came to Italy from Picardy, which explains the higher concentration of the name in the north; France is north-west of Italy; so Tuscany would be one of the first places in Italy that someone coming from France would pass through, especially if they were coming by sea to avoid crossing the mountains.

Early History of the Picariello family

This web page shows only a small excerpt of our Picariello research. Another 103 words (7 lines of text) covering the years 1571 and 1883 are included under the topic Early Picariello History in all our PDF Extended History products and printed products wherever possible.

More information is included under the topic Early Picariello Notables in all our PDF Extended History products and printed products wherever possible.

Migration of the Picariello family