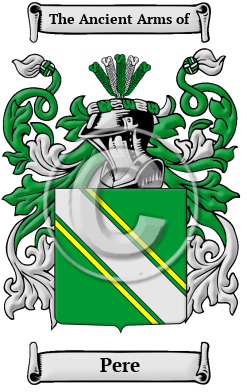 The Pere surname is thought to have evolved independently from two distinct sources. Some instances of the name come from the Middle English "le pere," from the Old English "le-ap," meaning "a basket;" in which case the name was occupational for a basket maker. Other instances of the name come from the Old English "hle-apere," meaning a "dancer," "runner," or "courier," and the name would have been either occupational or nickname.

Early Origins of the Pere family

The surname Pere was first found in Warwickshire the first on record of the name appears to be Robert Lepere, a Knights Templar in Warwickshire in 1185. Later in Essex, Geoffrey Lepere was listed in the Curia Regis Rolls for 1221. Richard le Lepor was recorded in 1298. [1]

The Hundredorum Rolls of 1273 included: Geoffrey le Lepere, Oxfordshire; Walter le Lepere, Buckinghamshire; and Robert Leper, Lincolnshire. In Yorkshire, Alicia Lepar was listed there in the Yorkshire Poll Tax Rolls of 1379. William le Poure was found in the Close Rolls, 1 Edward I (during the first year of the reign of King Edward I.) [2]

Early History of the Pere family

This web page shows only a small excerpt of our Pere research. Another 59 words (4 lines of text) covering the years 1200, 1295 and 1713 are included under the topic Early Pere History in all our PDF Extended History products and printed products wherever possible.

Before English spelling was standardized a few hundred years ago, spelling variations of names were a common occurrence. Elements of Latin, Norman French and other languages became incorporated into English throughout the Middle Ages, and name spellings changed even among the literate. The variations of the surname Pere include Leeper, Leaper, Leper, LePere, Lepere, Lepper, Leiper, Leyper, Peer, Pere, Peir and many more.

Outstanding amongst the family at this time was William Peer (died 1713), English actor. He owes the survival of his name to a humorous mention of his career...
Another 27 words (2 lines of text) are included under the topic Early Pere Notables in all our PDF Extended History products and printed products wherever possible.

Pere migration to the United States +

In England at this time, the uncertainty of the political and religious environment of the time caused many families to board ships for distant British colonies in the hopes of finding land and opportunity, and escaping persecution. The voyages were expensive, crowded, and difficult, though, and many arrived in North America sick, starved, and destitute. Those who did make it, however, were greeted with greater opportunities and freedoms that they could have experienced at home. Many of those families went on to make important contributions to the young nations in which they settled. Early immigration records have shown some of the first Peres to arrive on North American shores:

Pere Settlers in United States in the 19th Century