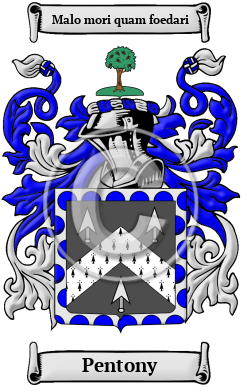 The Pentony surname is derived from the English parish of Pentney, in Norfolk, near Swaffham. The place-name Pentney is thought to be derived form the Old English words "pent" meaning "enclosure" and "eye" meaning "island."

Early Origins of the Pentony family

The surname Pentony was first found in Norfolk at Pentney, a village and civil parish about 8 miles (13 km) south east of Kings Lynn that dates back to at least the 3rd or 4th centuries as evidence of a Romano-British local pottery industry was discovered and an ancient Roman road has been found running close to the settlement. The village is situated on the north bank of the river Nar. The Domesday Book, [1] lists this settlement as Penteleist and was held at that time by Robert de Vaux from Roger Bigod, the great Norman Baron. Pentney held 3 mills, 7 beehives and 1/2 a salt mill. About a mile to the west is the gate-house of a priory of Black canons, founded in honor of the Holy Trinity, the Blessed Virgin Mary, and St. Mary Magdalene, by Robert de Vallibus (Vaux) c. 1130, a follower of the Conqueror. In the grounds of the priory, three long swords, and some silver coins, were discovered by the plough. In 1977, a gravedigger found six silver Saxon brooches while digging a grave at the church. Years later, the British Museum identified the 9th century silver disc brooches of national importance and the gravedigger was given £135,000 by the Museum which now proudly displays the items as the Pentney Treasure.

Early History of the Pentony family

This web page shows only a small excerpt of our Pentony research. Another 111 words (8 lines of text) covering the years 1290, 1211 and 1172 are included under the topic Early Pentony History in all our PDF Extended History products and printed products wherever possible.

More information is included under the topic Early Pentony Notables in all our PDF Extended History products and printed products wherever possible.

Migration of the Pentony family to Ireland

Some of the Pentony family moved to Ireland, but this topic is not covered in this excerpt.
Another 79 words (6 lines of text) about their life in Ireland is included in all our PDF Extended History products and printed products wherever possible.

Pentony migration to the United States +

Pentony Settlers in United States in the 19th Century