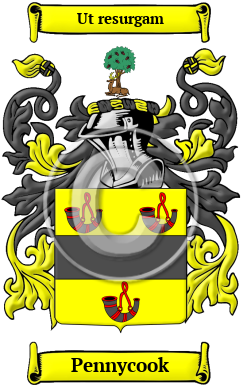 Early Origins of the Pennycook family

The surname Pennycook was first found in Midlothian, where the family claim descent from the barony Penicuik. "The present name of this place is supposed to be derived from a British or Gaelic word signifying "Cuckoo's hill;" and as several places in the neighbourhood also received their epithets from this bird, it is probable that it was a frequent visitor in these quarters. " [1] New Hall (New-Hall) lies on the border of a desolate moor, and was passed from the families of Crichtoune, Penicuick, and Oliphant. "The first of the family in record is William de Penycook, one of the persons directed to fix the extent of the lands of Lethenhop in the reign of Alexander II." [2] David de Penikok witnessed a charter of the lands of Inuerpefir in 1250.

Early History of the Pennycook family

This web page shows only a small excerpt of our Pennycook research. Another 112 words (8 lines of text) covering the years 1296, 1604, 1652, 1722, 1644 and 1646 are included under the topic Early Pennycook History in all our PDF Extended History products and printed products wherever possible.

Notable amongst the family at this time was Alexander Pennecuik (1652-1722), Scottish physician and poet, the eldest son of Alexander Pennecuik of Newhall, Edinburgh. His father had been a surgeon under General Bannier in the thirty years' war, and afterwards...
Another 40 words (3 lines of text) are included under the topic Early Pennycook Notables in all our PDF Extended History products and printed products wherever possible.

Pennycook migration to the United States +

Pennycook Settlers in United States in the 19th Century

Pennycook Settlers in Canada in the 19th Century

Pennycook Settlers in Australia in the 19th Century

Pennycook Settlers in West Indies in the 19th Century

Historic Events for the Pennycook family +