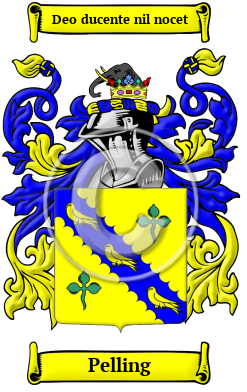 The name Pelling predates the arrival of the Normans in Britain, and as such is one of the older names in the British Isles. As a surname, Pelling is thought to be derived from the place named Peelings in Sussex (on record in the Domesday Book of 1066 as Pellinges). This place name is in turn thought to be derived from the Old English word "Pydelingas," or "the people of Pydel."

Early Origins of the Pelling family

Pilling in Lancashire is a "chapelry, in the parish and union of Garstang, hundred of Amounderness" [2] [3] and dates back to c. 1195 when it was known as Pylin. [4]

Other early records include a William Pelling recorded in 1222, in the Building Accounts of King Henry III, Wylelmus Pylyng, recorded in the Poll Tax for Yorkshire in 1379. [5] As far as the origin of the name is concerned, the name means "dweller by the creek" from the Old English word "pylling," [6] and while creeks are quite common throughout England, the name is not.

Early History of the Pelling family

Spelling variations of this family name include: Pelling, Pylyng, Peling and others.

Notables of this surname at this time include: Sir John Henry Pelly (1777-1852), Baronet of Upton, Governor of the Hudson Bay Company, and namesake of the Pelly River in the Yukon, Canada. Edward Pelling (died 1718), was an English divine from Wiltshire and Fellow of Trinity College, Cambridge. He was educated at Westminster School, and was admitted on 3 July 1658 to Trinity College, Cambridge, becoming a scholar on 14 April 1659. "Pelling was a stout defender of the Anglican church against both...
Another 82 words (6 lines of text) are included under the topic Early Pelling Notables in all our PDF Extended History products and printed products wherever possible.

Pelling migration to the United States +

Pelling Settlers in United States in the 19th Century