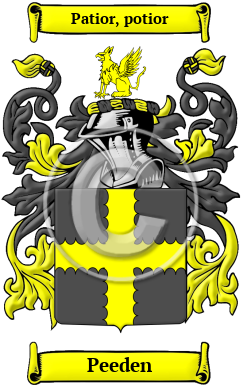 The name Peeden came to England with the ancestors of the Peeden family in the Norman Conquest of 1066. The Peeden family lived in Sussex, at Peyton, a small town near Boxford from whence their name derives.

Early Origins of the Peeden family

The surname Peeden was first found in Suffolk where "the Peytons have a common descent with the Uffords, afterwards Earls of Suffolk, from the great Baron William Mallet, who came hither at the Conquest. The first of the family who assumed the surname was Reginald de Peyton, lord of Peyton in the parish of Boxford, co. Suffolk, in which county, at Isleham, in later centuries, his descendants were very eminent. In medieval charters, this surname was latinized De Pavilliano and Pietonus." [1] [2] Later some of the family were found at Doddington in Cambridgeshire. " The manor was one of the ancient estates of the church of Ely, and was alienated by Bishop Heton to the crown in 1600; it soon afterwards became the property of the Peytons, who appear to have been settled here nearly a century before, as lessees of the bishop. John Peyton was created a Baronet in 1660, and dying without issue, his next brother, Algernon, was advanced to the same dignity in 1666. The title again becoming extinct in 1771, on the death of Sir Thomas Peyton, who was the last male heir of the family, Henry Dashwood, Esq., whose father had married a daughter of Sir Sewster Peyton, succeeded to the estate, took the name of Peyton by act of parliament, and was created a baronet in 1776." [3] There is a small chapelry named Peyton in Devon in the parish and hundred of Bampton, union of Tiverton and this may be a later branch of the family.

Early History of the Peeden family

Multitudes of spelling variations are a hallmark of Anglo Norman names. Most of these names evolved in the 11th and 12th century, in the time after the Normans introduced their own Norman French language into a country where Old and Middle English had no spelling rules and the languages of the court were French and Latin. To make matters worse, medieval scribes spelled words according to sound, so names frequently appeared differently in the various documents in which they were recorded. The name was spelled Peyton, Payton and others.

Outstanding amongst the family at this time was Sir John Peyton (1544-1630), English soldier and Governor of Jersey from Isleham, Cambridgeshire; and his son, Sir Edward Peyton (1588-1657), English parliamentarian, High Sheriff of the Cambridgeshire in 1593 and 1604. Thomas Peyton (1595-1626), was an English poet from Royston, Cambridgeshire, probably a younger son of Sir John Peyton of Isleham. Sir Samuel Peyton, (d. 1623) was 1st Baronet, of Knowlton, Kent; and his son, Sir Thomas Peyton, 2nd Baronet (1613-1684), was an English politician, Member of Parliament for Sandwich (1640-1644) and Kent (1661-1679). Sir Henry Peyton (died 1622), was an English adventurer, son of...
Another 104 words (7 lines of text) are included under the topic Early Peeden Notables in all our PDF Extended History products and printed products wherever possible.

Migration of the Peeden family to Ireland

Some of the Peeden family moved to Ireland, but this topic is not covered in this excerpt. More information about their life in Ireland is included in all our PDF Extended History products and printed products wherever possible.

Migration of the Peeden family

Because of this political and religious unrest within English society, many people decided to immigrate to the colonies. Families left for Ireland, North America, and Australia in enormous numbers, traveling at high cost in extremely inhospitable conditions. The New World in particular was a desirable destination, but the long voyage caused many to arrive sick and starving. Those who made it, though, were welcomed by opportunities far greater than they had known at home in England. Many of these families went on to make important contributions to the emerging nations of Canada and the United States. Analysis of immigration records indicates that some of the first North American immigrants bore the name Peeden or a variant listed above: Henry Payton, who settled in Virginia in 1623; Robert Payton, who came to Virginia in 1634; Peter Payton, who settled in Virginia in 1636; George Peyton settled in Virginia in 1748.