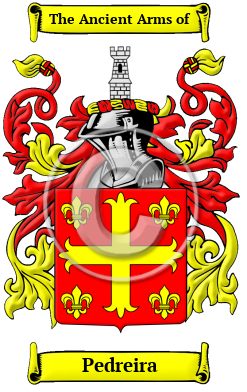 The notable surname Pedreira is a proud sign of a rich and ancient Spanish ancestry. The earliest forms of hereditary surnames in Spain were the patronymic surnames, which are derived from the father's given name, and metronymic surnames, which are derived from the mother's given name. Spanish patronymic names emerged as early as the mid-9th century and the most common patronymic suffix is "ez." The patronyms were derived from a variety of given names that were of many different origins. In Europe, the Christian Church was one of the most powerful influences on the formation of given names. Personal names derived from the names of saints, apostles, biblical figures, and missionaries are widespread in most European countries. In the Middle Ages, they became increasingly popular because people believed that the souls of the deceased continued to be involved in this world. They named their children after saints in the hope that the child would be blessed or protected by the saint.

Early Origins of the Pedreira family

The surname Pedreira was first found in Castile, where the name originated in Visigothic times.

Early History of the Pedreira family

Prominent among members of the family was the legendary Castilian heroine María Pérez who, disguised as a man, fought against and defeated the Aragonese King Alfonso I and later married a Castilian prince; Pelayo Pérez de Fromesta, a knight of Castile in 1155; Count Alvar Pérez de Lara, tutor to the young King Alfonso VIII in 1168; Gutierre Pérez de Reynoso, ambassador of Alfonso VIII to the King of England; Ferran Peres Pardo, a knight of the order of Santiago; Alvar Pérez, who in 1227 was betrothed to a daughter of the King of Navarre; Rodrigo Pérez de Tapiola received a...
Another 145 words (10 lines of text) are included under the topic Early Pedreira Notables in all our PDF Extended History products and printed products wherever possible.

Migration of the Pedreira family

Some of the first settlers of this family name or some of its variants were: Juan Pérez de Sorita of Cordoba, who voyaged to Peru in 1550 and to Argentina in 1557. Other members of the family who were early emigrants to Spain's colonies in the New World included Iné.