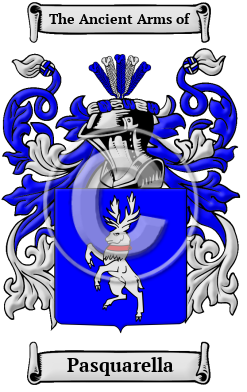 From the historical and fascinating Italian region of Venice emerged a multitude of noble families, including the distinguished Pasquarella family. Although people were originally known only by a single name, it became necessary for people to adapt a second name to identify themselves as populations grew and travel became more frequent. The process of adopting fixed hereditary surnames was not complete until the modern era, but the use of hereditary family names in Italy began in the 10th and 11th centuries. Italian hereditary surnames were developed according to fairly general principles and they are characterized by a profusion of derivatives coined from given names. Although the most common type of family name found in the region of Venice is the patronymic surname, which is derived from the father's given name, the nickname type of surname is also frequently found. Nickname surnames were derived from an eke-name, or added name. They usually reflected the physical characteristics or attributes of the first person that used the name. The surname Pasquarella came from a person who was born on Easter day. The name Pasquarella is derived from the word Pasqua, which in Italian means Easter, which is the Christian holiday that celebrates the resurrection of Christ. The word Pasqua itself is derived from the ecclesiastical Latin word Pascha, which in turn comes from the Greek Pascha and the Hebrew Pesah (through the Aramaic Pisha). Pesah was the holiday which celebrated the liberation of the people of Israel from the slavery in Egypt, and coincided with the Christian holiday.

Early Origins of the Pasquarella family

The surname Pasquarella was first found in the north in Bologna, Florence, Ferrara, and of course, Venice.

Early History of the Pasquarella family

This web page shows only a small excerpt of our Pasquarella research. Another 152 words (11 lines of text) covering the years 1501, 1509, 1525, 1614, 1691, 1500 and 1551 are included under the topic Early Pasquarella History in all our PDF Extended History products and printed products wherever possible.

Surnames that originated in Italy are characterized by an enormous number of spelling variations. Some of these are derived from regional traditions and dialects. Northern names, for instance, often end in "o", while southern names tend to end in "i". Other variations come from the fact the medieval scribes tended to spell according to the sound of words, rather than any particular set of rules. The recorded variations of Pasquarella include DePasquale, Pascale, Pascali, Pascalino, Pascalis, Pascalizzi, Pascarello, Pasquale, Pasqualetti, Pasquali, Pasqualigo, Pasqualini, Pasqualino, Pasqualis, Pasquarella, Pasquarelli, Pasquarello and many more.

Prominent among members of the family was Marc Antonio Pasqualini (1614-1691), an Italian castrato opera singer; and Ludovico Pasquali, (c. 1500-1551), an Italian author, lyric poet who was a member of a prominent Venetian family and received his degree at the University of Padua, one of the oldest in the world. Later, he took a voyage on the Adriatic and was captured by corsairs. When...
Another 65 words (5 lines of text) are included under the topic Early Pasquarella Notables in all our PDF Extended History products and printed products wherever possible.

Migration of the Pasquarella family

Research into the origins of individual families in North America has revealed records of the immigration of a number of people bearing the name Pasquarella or a variant listed above: Franco Pascale, who arrived in Philadelphia, Pennsylvania in 1880; Antonia DePasquale, aged 20, who arrived at Ellis Island from Spadafora, Sicily, in 1913.