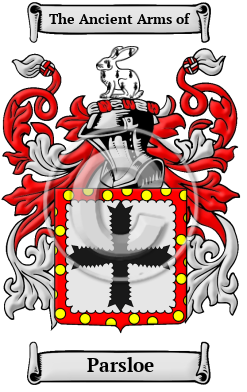 Of all the Anglo-Saxon names to come from Britain, Parsloe is one of the most ancient. The name is a result of the original family having lived in Purslow, in Shropshire. The place-name is derived from the Old English personal name Pussa and the Old English word hlaw. A hlaw is a burial mound; in Modern English the word for a burial mound is tumulus, which is derived from Latin. The place-name as a whole means "burial mound of a man named Pussa."

Early Origins of the Parsloe family

The surname Parsloe was first found in Shropshire at Purslow, a hamlet that dates back to the Domesday Book where it was listed as Possalau. The place name is derived from the Old English words personal name + hlaw, and literally means "tumulus (mound of earth and stones) of a man called Pussa." [1] Of interest is a certain Robert Parslow. " It is traditionally said that a military chest of money was left at the house of Robert Parslow, in the town [of Watlington in Oxfordshire], and never afterwards claimed, in consequence of which he bequeathed a liberal donation to the poor of the parish." [2]

Early History of the Parsloe family

This web page shows only a small excerpt of our Parsloe research. Another 61 words (4 lines of text) covering the years 1533, 1563, 1558, 1559, 1500 and 1579 are included under the topic Early Parsloe History in all our PDF Extended History products and printed products wherever possible.

The first dictionaries that appeared in the last few hundred years did much to standardize the English language. Before that time, spelling variations in names were a common occurrence. The language was changing, incorporating pieces of other languages, and the spelling of names changed with it. Parsloe has been spelled many different ways, including Purslow, Purseglove, Purselove, Pursley, Pursly and others.

Another 50 words (4 lines of text) are included under the topic Early Parsloe Notables in all our PDF Extended History products and printed products wherever possible.

Parsloe Settlers in Australia in the 19th Century