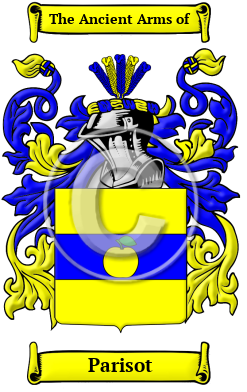 Noble surnames, such as Parisot, evoke images of the ancient homeland of the French people. The original bearer of the name Parisot, which is a local surname, once lived, held land, or was born in the beautiful region of Lorraine. In France, hereditary surnames were adopted according to fairly general rules and during the late Middle Ages, names that were derived from localities became increasingly widespread. Local names originally denoted the proprietorship of the village or estate. The Parisot family originally lived at the town of Paresse or Parez, in the Lorraine. Although one would at first assume that the name is derived from the city of Paris, evidence suggests that the names of both the town in the Lorraine and the French capital are derived from a Gaulish tribe called the Parisii.

Early Origins of the Parisot family

The surname Parisot was first found in Lorraine where this distinguished family held a family seat at Paresse or Parez in that province, and were important members of the aristocracy. The main stem of the family became the Barons of Dagonville, Comtes de Sanpigny, and the Marquis de Bruney in 1730.

Early History of the Parisot family

This web page shows only a small excerpt of our Parisot research. Another 72 words (5 lines of text) covering the years 1259, 1540, 1598, 1625, and 1662 are included under the topic Early Parisot History in all our PDF Extended History products and printed products wherever possible.

More information is included under the topic Early Parisot Notables in all our PDF Extended History products and printed products wherever possible.

In France, the name Parisot is the 693rd most popular surname with an estimated 6,954 people with that name. [1]

Migration of the Parisot family

Some of the first settlers of this family name or some of its variants were: Edward Paris who settled in Barbados in 1679 with his wife Elisabeth; Isaac Paris arrived in Philadelphia in 1751 with his wife Rachel, and sons Pierre, Isaac, Jean-Martin and Daniel.